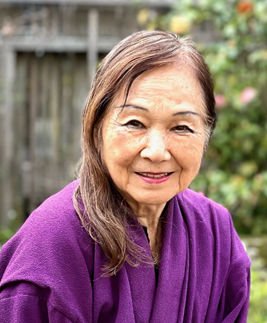 Yoshi Akiba was born in Japan in 1942 and was orphaned during the War. She came to the United States in 1961 as the wife of a U.S. Naval Officer to live in Baltimore Maryland. There, she began studies at the Peabody Music Conservatory at age 19.

In the late 60s, she moved to Berkeley California with ten dollars in her pocket where she traded cooking and cleaning for rent while applying to study at UC Berkeley. In 1973 she and two friends, Kaz Kajimura and Hiroyuki Hori, started Yoshi’s, as a small Japanese restaurant in the Berkeley Northside neighborhood.

In 1975 she completed a Bachelor of Arts degree in Fine Art at the University of California, Berkeley. Four years later she completed a Master of Arts degree in Dance Therapy along with a Master of Fine Arts in Dance Performance at Mills College in Oakland. In 2014, she also received the Honorary Degree of Doctor of Fine Arts from California State University, East Bay, and the Jefferson Medal in 2017 from the Thomas Jefferson Foundation.

In 1977, Yoshi’s restaurant expanded, moved to Claremont Avenue in Oakland, and added a jazz club. She and her collaborators also opened a small zen meditation hall and tea room in the attic of their home; it was officially dedicated as Kojin-an Zendo in 1983.

In 1988, Yoshi married Rev. Gengo Akiba, and in 1990, they moved their residence and Kojin-an to its present location in the Rockridge neighborhood of Oakland.

Yoshi’s Restaurant and Jazz Club expanded again and moved to Oakland’s Jack London Square in 1997. In 2008, a second restaurant and jazz club opened in San Francisco. Yoshi’s is one of the most popular venues in the Bay Area, for musicians and fans alike. With the support of the jazz club, Yoshi helped to found the non-profit 51Oakland to bring music and art to under-served Oakland public schools.

Yoshi Akiba has been a Senior Teacher in the Omotesenke School of Tea Ceremony since 1978. She offers private lessons in her home at Kojin-an each week. She especially enjoys hosting groups of young people.